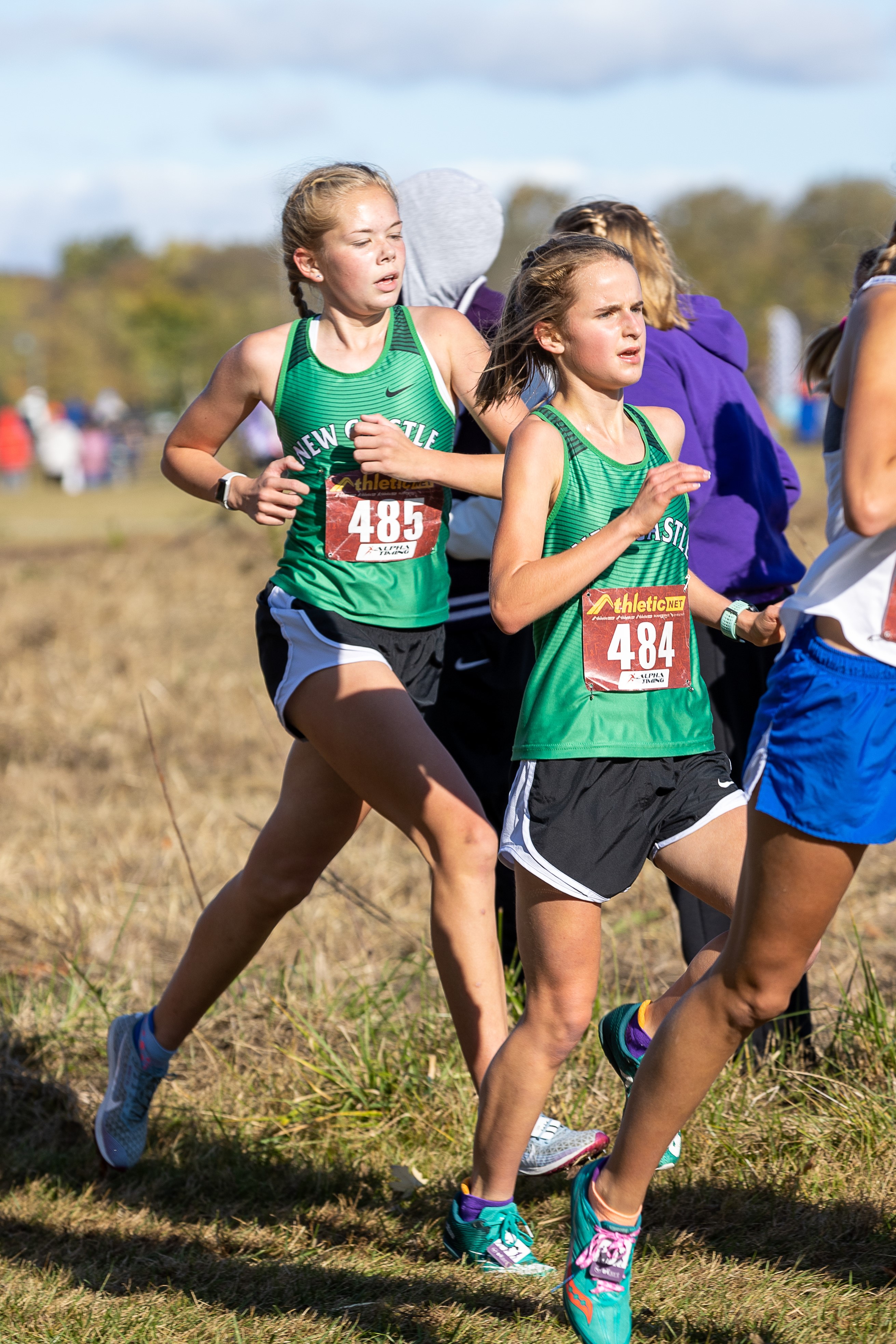 On Saturday, October 24 the New Castle High School Girls & Boys Cross Country Teams traveled to Shelbyville, Indiana to compete in their third meet of the state tournament, the Semi-State Meet. The location of the meet was the Blue River Championship Cross Country Course on the grounds of Shelbyville’s Blue River Memorial Park. The Trojans knew the 5,000 meter (3.1 mile) course well as they had already raced there twice this season at the Golden Bear Invitational as well as the Hoosier Heritage Conference Meet. The Semi-State Meet consists of 180 runners including the top 5 teams and the top 10 individuals on non-advancing teams from four feeder Regional Meets. The weather was fairly ideal for a cross country meet. Temperatures were brisk and skies were partly cloudy in the early morning as the teams prepared for their races. At 10:30am, race start time for the girls, the sun had broken through the clouds and temperatures were in the low to mid 40s with a light breeze out of the west. At 11:25am, race start time for the boys, a stronger breeze out of the west had picked-up and the temperatures were in the mid to upper 40s. The Trojan harriers had scouted the field and knew the competition would be intense and this meet would be their biggest challenge of the season. Two Trojans, sophomore Lydia Harvey and junior Skyler Dickey, had Semi-State experience to draw on from their 2019 season when they both competed in this same meet on this same course. To advance to the next level the Trojans would have to place in the top 6 teams or be one of the top 10 individuals on a non-advancing team to secure their spot at the State Cross Country meet. At the end of the day, most of the Trojans ran very solid races, right in the range of where they had run in recent weeks, yet no Trojans advanced to the State Meet.

Representing the Lady Trojans in the Semi-State Meet were sophomore Lydia Harvey and freshman Sydney Mathews. Harvey had been getting stronger all season after returning from an early season injury and newcomer Mathews had established herself as one of the Lady Trojan frontrunners from the beginning of the season. Both had earned their spot in the Semi-State meet as individuals by placing 10th (Mathews) and 18th (Harvey) in the Regional Meet the week prior. For most of the season the two had run with each other during the bulk of each race to push themselves to top performances. The plan for the Semi-State meet was again to work together in hopes of achieving their best marks of the season. Mathews led the pair through the first mile in a split right in the range of where they expected to be. During the second mile of the race Harvey took charge with Mathews right on her shoulder. In the final mile Harvey surged ahead of her teammate and looked strong as she moved past competitor after competitor as she picked them off one by one. As they entered the last 800 meters of the race and rounded the final turn down the finishing straight-away Harvey led Mathews by several seconds. Mathews, known for her strong kick in the final stages of the race, closed on Harvey as she too put on her final push to the finish line. At the tape the two were only separated by three seconds. Harvey’s time of 20:42.9 was good for 103rd place and Mathews crossed the line in 20:45.5 (105th place). Harvey was just three seconds off of the time she ran at the Regional Meet the previous week and just four seconds off of what she ran at the 2019 Semi-State Meet. Mathews finished a very successful and impressive freshman season. Both extremely diligent and dedicated student athletes, will take a brief break from training and then resume workouts to prepare for their goals set for next season.