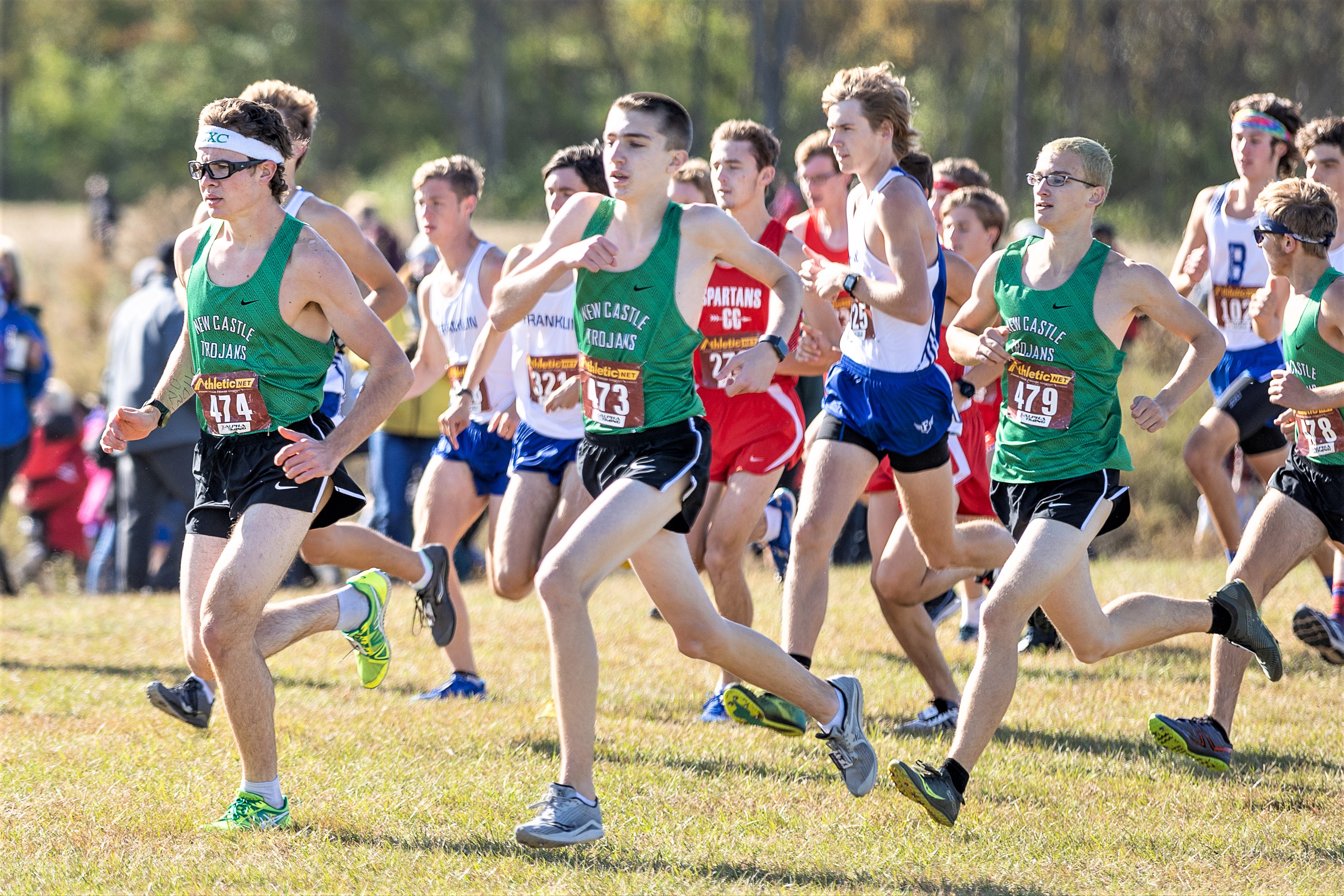 On Saturday, October 24 the New Castle High School Girls & Boys Cross Country Teams traveled to Shelbyville, Indiana to compete in their third meet of the state tournament, the Semi-State Meet. The location of the meet was the Blue River Championship Cross Country Course on the grounds of Shelbyville’s Blue River Memorial Park. The Trojans knew the 5,000 meter (3.1 mile) course well as they had already raced there twice this season at the Golden Bear Invitational as well as the Hoosier Heritage Conference Meet. The Semi-State Meet consists of 180 runners including the top 5 teams and the top 10 individuals on non-advancing teams from four feeder Regional Meets. The weather was fairly ideal for a cross country meet. Temperatures were brisk and skies were partly cloudy in the early morning as the teams prepared for their races. At 10:30am, race start time for the girls, the sun had broken through the clouds and temperatures were in the low to mid 40s with a light breeze out of the west. At 11:25am, race start time for the boys, a stronger breeze out of the west had picked-up and the temperatures were in the mid to upper 40s. The Trojan harriers had scouted the field and knew the competition would be intense and this meet would be their biggest challenge of the season. Two Trojans, sophomore Lydia Harvey and junior Skyler Dickey, had Semi-State experience to draw on from their 2019 season when they both competed in this same meet on this same course. To advance to the next level the Trojans would have to place in the top 6 teams or be one of the top 10 individuals on a non-advancing team to secure their spot at the State Cross Country meet. At the end of the day, most of the Trojans ran very solid races, right in the range of where they had run in recent weeks, yet no Trojans advanced to the State Meet.

As the Trojan boys team stepped onto the starting line four seniors in the squad knew this might be the last cross country race of their high school career and each had set certain goals for the day. Going into the race, junior Andrew Fewell had the best chance of any Trojan to advance to the State Meet. Fewell knew that he had to get out strong and hold the pace in order to have hopes of moving on. At the starting gun, junior Andrew Fewell established himself in the midst of the lead back. Around the 1,000 meter mark Fewell was in the top 10 and at the first mile post he hit the mark eight seconds faster than he had all season. At the 2 mile mark Fewell was still on-pace for one of his best races of the season. During the final mile of the race Fewell fought hard to hold position in the strong field of competitors. At the tape Fewell’s final position was 91st place with a time of 17:09.3. Fewell’s finishing time was his fourth best of the season and was just 26 seconds off of the time he had run the week prior at the Regional Meet where he placed 4th.

Junior Skyler Dickey has been steadily improving all season and has established himself as the Trojan’s solid number two runner in recent weeks. Several of his teammates hoped to stay in close proximity to Dickey for as long as they could during the Semi-State meet. At the 1,000 meter mark Dickey had teammates, freshman Harry Callaway and senior Ethan Moore in tow with senior Ayden Humbles not far behind. By the 2,000 meter mark Dickey had pulled away from his teammates. Callaway was about ten places behind Dickey as Moore followed closely on the heels of Callaway. By 2 miles into the race the four had several seconds of separation between each with Dickey continuing to lead the charge. Dickey eclipsed the 2 mile mark in his third quickest split of the season at that distance. Still on the move in the final mile of the race, Dickey found himself in a pack with nine other runners as they rounded the last turn with 600 meters to go in the race. During his final surge to the tape Dickey put seven of the competitors behind him as he crossed the line in a time of 17:42.2 which was good for 127th place. Dickey’s time was his third best of the season. A little further back in the pack, Callaway was running a solid race as he prepared for his final push to the finish. Callaway ran one of his fastest final mile splits of the season which resulted in a finishing time of 18:12.5 and placing 153rd. Callaway’s time was his fourth best of the season and was just 17 seconds off of his personal best. Not far behind Callaway was Moore who was in a pack of about six other runners jostling for position. Moore ran one of his best middle miles of the season to put around half of those competitors behind him. Rounding the final turn with 600 meters to go Moore shifted into high gear and put three more competitors behind him by the time he crossed the line. Moore’s time of 18:33.1 was good for 165th place which was his fourth best of the season and was just 12 seconds shy of the time he had run the week prior at the Regional Meet. Humbles completed the top five scoring for the Trojans. Humbles ran a respectable race, just a bit slower than he had in recent weeks, finishing in 174th place with a time of 19:16.4. Humbles’ time was his fourth best of the season.

Rounding out the Semi-State squad for the Trojans were seniors Quentin Hedges and Dominic Reynolds. Both Hedges and Reynolds ran their first 2 miles of the race in relatively the same clip as they have the past few meets. Reynolds had set some definite goals for his meet as he has been improving all season and especially so in recent weeks. Determined to reach his goal, after the 2 mile mark Reynold hit the throttle and ran his second fastest final mile split of the season which resulted in a personal best time of 19:40.6 which was three seconds faster than his previous best. Definitely one of the best ways to run the last cross country race of his high school career. Hedges followed by crossing the line in 20:01.3 which was basically the exact same time he had run on this same course three weeks previously at the Hoosier Heritage Conference meet.

As a team the Trojans placed 20th but can hold their heads high knowing that they made it this far into the season. All in all the Trojan Boys Team posted solid performances across the board. Knowing that being a distance runner is a year round commitment, after a brief break from training most these athletes will resume workouts to prepare for next season. The team will lose six seniors and those will be big shoes to fill as the team looks to add more numbers to their squad in 2021.