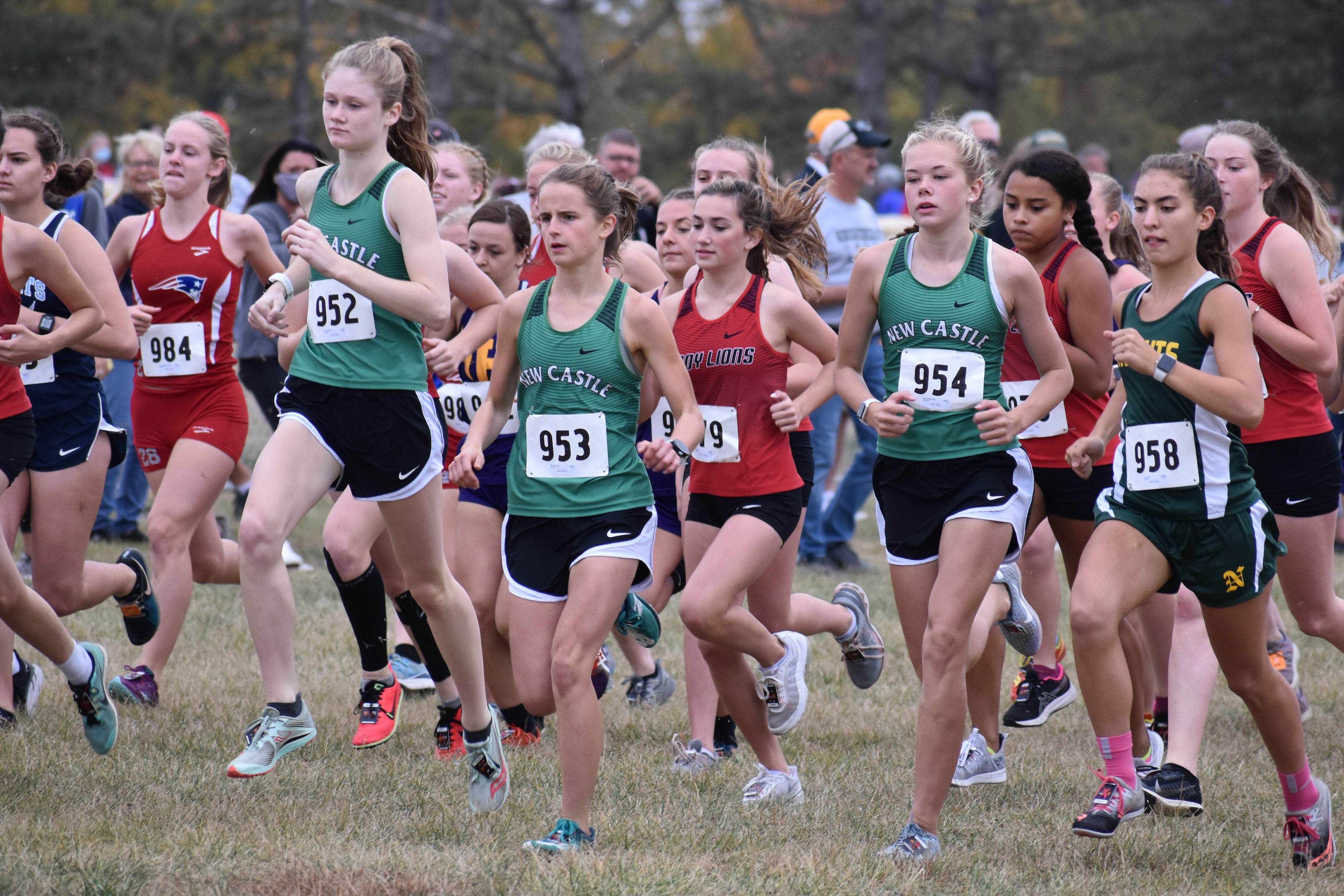 On Saturday, October 10 the New Castle High School Girls & Boys Cross Country Teams traveled to Connersville, Indiana to compete in their first meet of the state tournament, the Sectional Meet. The meet was hosted on the grounds of Connersville High School. The skies were overcast with a steady breeze out of the west. At race time temperatures in the mid 60s. Several Trojan harriers had goals of advancing to the Regional Meet as two complete teams. In Cross Country, the top 5 teams advance along with the top 10 individuals on non-advancing teams. The Trojans had visited the course a couple of days prior to the meet so they knew the course well and had formulated their strategies that they planned to execute after the starting gun fired. In the end both teams placed in the top 5 (Boys placed 3rd, Girls placed 5th) and stayed alive to compete in the Rushville Regional meet the following week. This is the first time since 2015 that New Castle has advanced both teams to the Regional. In the boys race, Andrew Fewell was the individual meet champion. This was the first time since 2012 that the Trojans walked away with an individual win. In 2012 Tanner Dye was the individual winner for the Trojans.

Going into the Sectional Meet the Lady Trojans were seeded right on the bubble of placing in the top five teams and knew they would have to run well in order to have hopes of advancing to the Regional meet as a team. Normal front runners for the team, freshman Sydney Mathews and sophomore Lydia Harvey had scouted the competition and had their sights on placing high in the individual standings. Harvey and Mathews both have a keen ability for pacing and moving up through the field as the race progresses. Before the race the two had planned their strategy and discussed different scenarios that may play out. At the starting gun the pair were in the mix just behind the leaders and the initial jostling for position. By the 1,000 meter mark of the 5,000 meter race the two had established themselves in the top 10 lead group. By the 2,000 meter mark Harvey and Mathews were in 4th and 5th place respectively. By the 2 mile mark they were running in 5th and 6th place with Mathews leading the charge. The two kept those positions until the final 800 meters when Harvey was challenged for the 6th position. Harvey was visibly giving everything she had and fought hard for close to 400 meters to keep the challenger behind her. Ultimately, Mathews held in 5th place with a time of 21:32.2 and Harvey placed 7th in 22:07.1.

Sophomore Ella Garvin has been a solid number three runner for the Lady Trojans since returning from a stress fracture early in the season. Garvin got out to a decent clip during the first mile of the challenging course and settled in with even mile splits during the later stages of the race. Garvin finished in 32nd place with a time of 25:35.5. Up next were freshmen Lily Farmer and Lauren Watterson who have been the consistent fourth and fifth place scorers for the Trojans this season. Both freshmen knew they were key to the Lady Trojans’ chances to advance as a team and knew they had to perform well to keep the team advancement hopes alive. Both rose to the occasion as they had in recent weeks. Farmer ran a strong race and fought hard right to the finish to get every place she could secure. At the tape Farmer was in 42nd place with a time of 27:17.3 which was five seconds ahead of the next competitor who she had left in her dust during the last 400 meters of the race. Watterson has progressed immensely in recent weeks and as a result has been racing with more confidence. Watterson ran a strong race on the tough Connersville course and placed 49th in a time of 29:46.0. Senior Audra McClure has been in the sixth position for the Lady Trojans for most of the season. McClure ran a strong first 2 miles of the race and then struggled a bit in the later stages of the race. McClure held strong and stayed ahead of two Franklin County competitors in hopes of helping with the team standings for the Lady Trojans. McClure’s finishing time of 31:17.4 was good for 52nd place.

When the results were tallied, the Lady Trojans found they had placed 5th in the team standings, 32 points ahead of Franklin County, and were moving on to the Regional Meet at Rushville the following week.