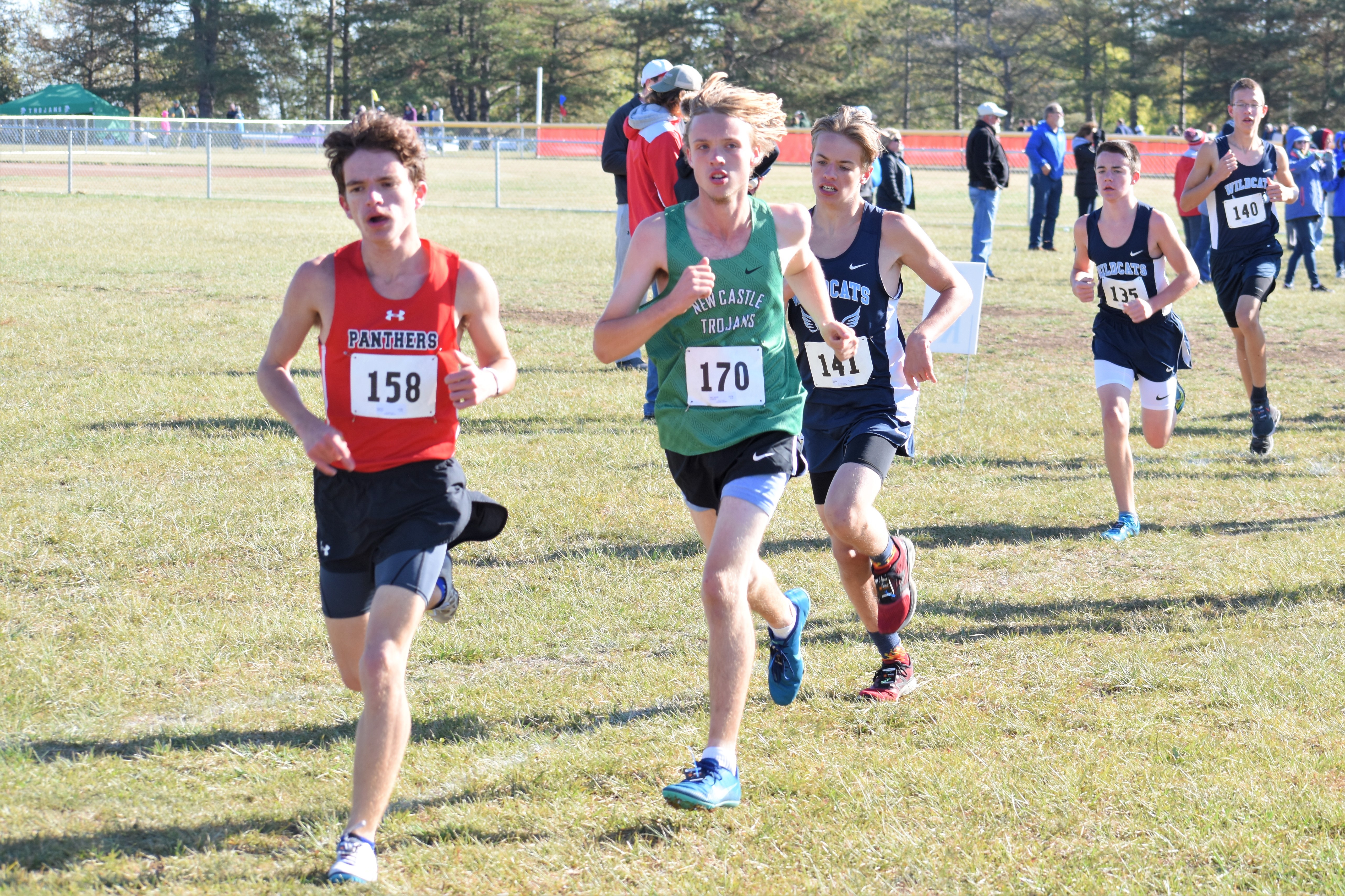 On Saturday, October 12, the New Castle Girls’ and Boys’ Cross Country Teams traveled to Connersville High School to compete in their first meet of State Tournament competition, the Sectional Meet. For Saturday morning race day, skies were sunny after Friday’s rains, temperatures had dropped into the 30s overnight with a breeze out of the southwest. By race time the temperatures had crept into the low to mid 40s which is very conducive for top cross country performance. To advance out of the Sectional Meet in high school cross country a team must place in the top 5 in the team standings and individual athletes must place in the top 10 athletes not on those 5 advancing teams.

All had high goals for this meet and had been preparing for many months for this day. The team had again researched the field and knew who their competitors were. The team had also made a visit to Connersville earlier in the week to walk and run the course to make sure the knew the terrain and plot their strategy for the meet.

Cross Country is a sport where each athlete knows that on race day they must be prepared to push themselves to the limits of their ability and to test their resolve both physically and mentally to push through the pain from the starting gun all the way through the finish line. The Connersville course has more hills than any other course the team has run all year so typically finishing times are not quite as fast as other meets.

Going into the Sectional Meet the the Trojan boys’ team had their sights on placing in the top five in the team scoring in order to advance as a team to the Regional Meet. Having posted several season best or near season best performances previous prior week at the HHC meet the team knew they had to perform at that same high level in order to make the cut for Regional competition.

Trojan front runner sophomore Andrew Fewell had taken a few weeks off from competition earlier in the season in hopes of rehabilitating a persistent knee injury so that he could race well and help his team advance to Regional. Shortly after the start of the race, Fewell was visibly struggling to keep his normal pace. Around the mile mark, Fewell was running with a limp and was falling back quickly. By the two mile mark, Fewell pulled off the course as the pain in his knee was too severe to continue. With Fewell out of the race, that left the remaining six Trojans with the task of moving forward.

Sophomore Skyler Dickey had a definite plan for how he wanted to run his race. Dickey got out to a good first mile, among the top fifteen in the standings, and was right where he wanted to be in the field at that point in the race. Dickey eclipsed the second mile with another solid split while picking off competitors along the way. Dickey posted his fasted final mile split of the season as he picked off others in the field one by one to put himself into the top ten. Dickey secured 10th place at the tape in a time of 18:03.10 which as just eleven seconds off of his personal best and six seconds faster on the tough Connersville course than he had run the previous week at the HHC meet on a much flatter and faster course. This was a very impressive race for Dickey.

Again this week, the exceptional performance for the Trojan boys’ team came from first year high school harrier, senior Drew Nelson. Nelson started out with one of his fastest first mile splits of the season in 5:51 while working up through the field from around thirtieth place. Nelson held steady the second mile and then stepped-on the gas the third and last mile of the race. Nelson eclipsed his last mile of the race in 5:52, and while other competitors around him were slowing, he was gaining and passing them one by one. At the tape, Nelson found himself in 25th place at the finish line with a personal best time of 19:02.30. Getting faster every meet this was the fourth week in a row that Nelson had posted a personal best time. What made this even more impressive is that the Connersville course for most competitors yields slower than normal times.

Next up was junior Ayden Humbles, who has normally been the number three runner for the Trojans this season. Humbles had been gaining fitness in recent weeks after backing off early in the season to heal an unexpected injury. Humbles posted a near personal best a the HHC meet the previous week and had hopes of sticking with Dickey for as long as he could during the race in hopes of pushing his teammate as well as himself to a better performance. During the first 1,000 meters of the race, Humbles was running with a pack close behind Dickey. After the mile mark, Humbles began to struggle and fell off a bit during the middle mile. In the last mile of the race, Humble regained some speed as he moved toward the finish. At the tape, Humbles time was 20:00.30 with a placing of 47th.

Junior Quentin Hedges started with a solid first mile after which sharp pains in his shins forced him to back off the pace. During the middle parts of the race, Hedges pace was well off his normal speed. Hedges dug deep to push through the pain in the later stages of the race and was gaining on his teammate Humbles. Hedges finished in 54th with a time of 20:18.40. Senior Ben Head has been working in earnest to rehabilitate an injury and his HHC performance the previous week indicated his efforts were yielding dividends. Head got out to a quick start with one of his fastest first mile splits of the season but struggled during the middle part of the race. Head stepped up the pace the later stages of the race to gain back position in the standings. At the line, Head finished in 61st place with a time of 21:00.20.

Sophomore Xander Bray ran a very good race moving higher in the rankings throughout the contest. Bray put on strong surges to pass competitors in the later stages of the race. Bray’s last mile split of 6:54 was his fastest final mile split of the season. Bray had a great finish and placed 65th with a time of 21:16.00 which was just 22 seconds slower than the previous week which was a respectable time on the Connersville course.

When the results were tallied, the NC boys team in the standings was 7th place and did not advance to Regional as a team. However, by placing as one of the top ten individuals on non-advancing teams, Dickey and Nelson advanced as individuals to the Regional Meet.

Dickey and Nelson will continue their State Tournament competition next Saturday, October 19 at 10:30am in the Regional Meet hosted at Rushville Middle School.

Complete Sectional results can be found at the following links: