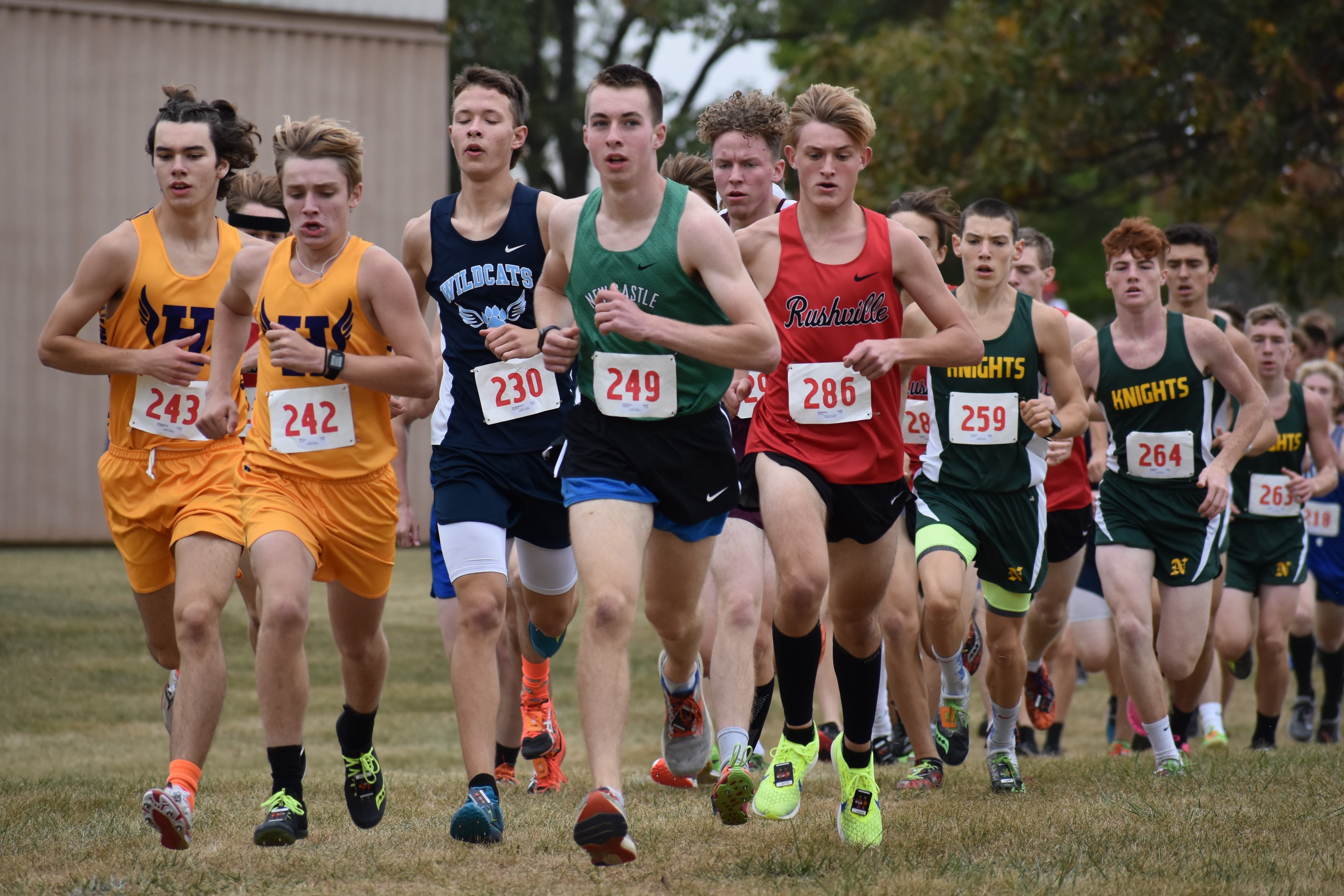 On Saturday, October 10 the New Castle High School Girls & Boys Cross Country Teams traveled to Connersville, Indiana to compete in their first meet of the state tournament, the Sectional Meet. The meet was hosted on the grounds of Connersville High School. The skies were overcast with a steady breeze out of the west. At race time temperatures in the mid 60s. Several Trojan harriers had goals of advancing to the Regional Meet as two complete teams. In Cross Country, the top 5 teams advance along with the top 10 individuals on non-advancing teams. The Trojans had visited the course a couple of days prior to the meet so they knew the course well and had formulated their strategies that they planned to execute after the starting gun fired. In the end both teams placed in the top 5 (Boys placed 3rd, Girls placed 5th) and stayed alive to compete in the Rushville Regional meet the following week. This is the first time since 2015 that New Castle has advanced both teams to the Regional. In the boys race, Andrew Fewell was the individual meet champion. This was the first time since 2012 that the Trojans walked away with an individual win. In 2012 Tanner Dye was the individual winner for the Trojans.

Junior Andrew Fewell was the individual meet champion in the field of 71 competitors. Fewell had his sights on the win and ran a smart race as he executed his strategy to achieve his goal. Fewell got out with the leaders and settled in behind a Hagerstown runner through the first mile mark when he put the throttle down and pulled away from the field. By the two mile mark Fewell had established a 150 meter lead as he continued to lengthen his lead. As Fewell moved into the last 800 meters of the 5,000 meter race he was well over 200 meters ahead of the next competitor. Fewell cruised across the finish line in first place with a time of 17:34.4 with the next competitor over eight seconds behind. Fewell is the first Sectional champion for New Castle since Tanner Dye crossed the tape first in the 2012 Sectional meet. Up next for the Trojans was junior Skyler Dickey who has been steadily improving all season. Dickey had his sights on a top 5 finish and knew who he had to run with in order to achieve that goal. Dickey, known for his steady pacing got out to a conservative start in the top 20 at around the 800 meter mark. By the 2,000 meter point in the race Dickey had moved up to the top 15 on his campaign toward the front. By the 2 mile mark Dickey had moved into fifth place and was still on the move. Coming into the final 800 meters Dickey had powered himself into third place with Rushville and Northeastern competitors hot on his tail. In the final jockeying for position the Rushville runner got around Dickey and the Northeastern runner fell by the wayside. At the tape Dickey was totally spent and had achieved his top 5 goal with a solid 4th place posting of 17:48.1 which was just five seconds out of 3rd and ten seconds ahead of the next competitor.

The New Castle boys team was at full strength for the first time in three weeks due to injury rehab and COVID quarantine restrictions. Freshman Harry Callaway was back in action after serving his time in quarantine and missing the HHC meet the week prior. Throughout the bulk of the first part of the race the trio of Seniors Ethan Moore and Ayden Humbles as well as Callaway worked together to push through the field. All three ran together stride for stride through the 2,000 meter mark when Callaway started to pull away from his teammates and Ethan Moore responded and went with him. In the final mile of the race Moore surged ahead as Callaway took chase. As they entered the final 800 meters of the race, Moore and Callaway found themselves in the midst of a pack of twelve runners looking to make their last ditch efforts to jostle for position before crossing the line. Both Moore and Callaway held their positions through the line as they finished in 23rd (18:56.8) and 27th (19:10.7) respectively. Rounding out the top five scoring for the Trojans was Humbles not far behind his teammates in 33rd place with a time of 19:36.9. Seniors Quentin Hedges and Dominic Reynolds were the next competitors on the Trojans’ Sectional roster. Both Hedges and Reynolds had been improving significantly in recent weeks to establish themselves in the final two spots on the varsity squad for tournament time. Both had a solid race on the challenging Connersville course. Hedges finished in 45th place with a time of 20:01.3 and Reynolds placed 59th in 21:22.9.

In the team standings, the Trojan boys placed 3rd, just four points behind 2nd place Northeastern and advance to the Regional Meet at Rushville next Saturday, October 10.