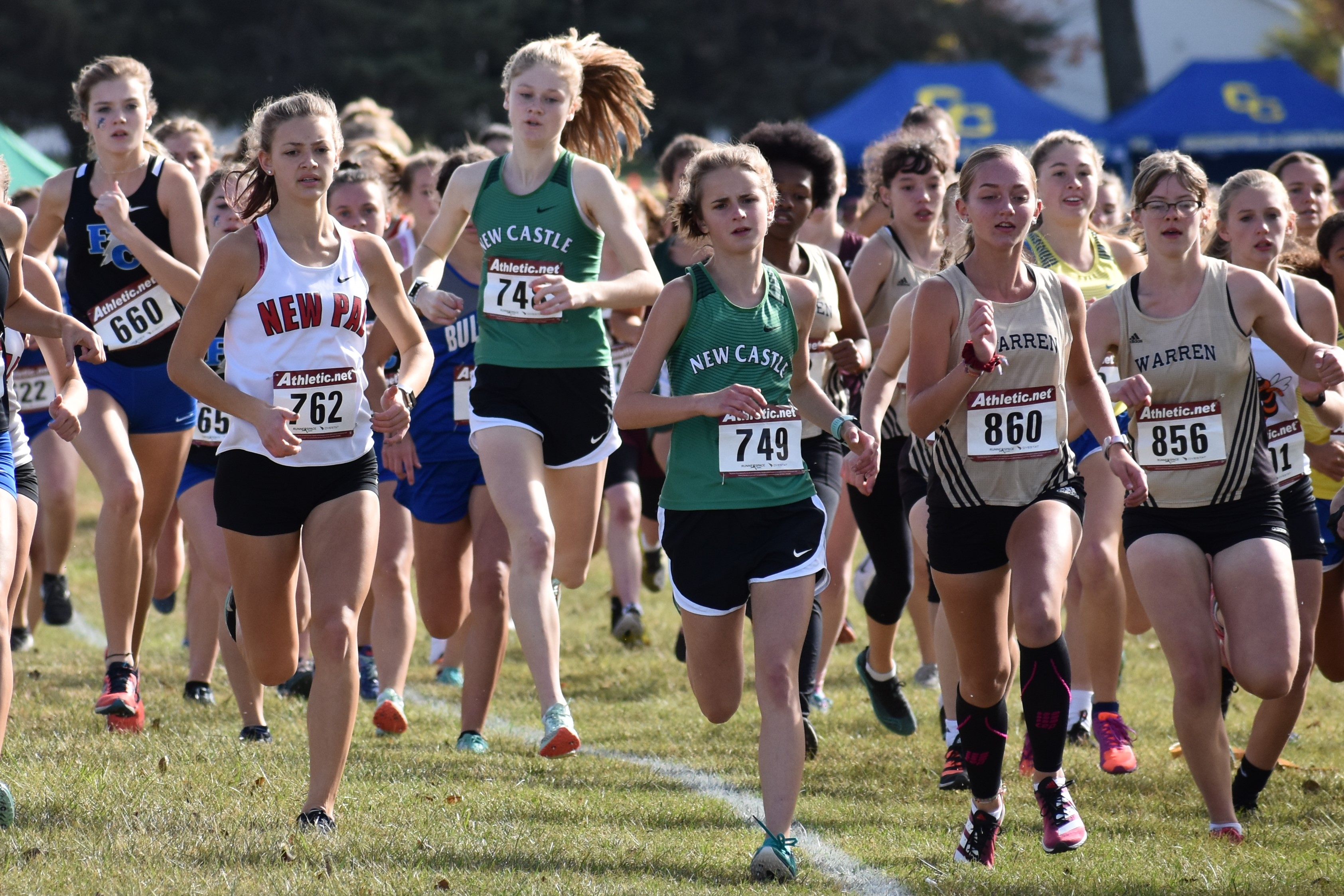 On Saturday, October 19, the New Castle Girls’ and Boys’ Cross Country Teams traveled to Rushville to compete in their second meet of State Tournament competition, the Regional Meet. The meet was held on the grounds of the Rushville Elementary and Middle Schools. For the Saturday morning race day, temperatures were brisk, in the mid to upper 40’s at first for the boys’ race and then and climbing into the low 50’s for the girls’ race. Skies were sunny with a breeze out of the southwest. Conditions were conducive for Cross Country racing.

The Trojans had two boys and two girls who had advanced out of the prior week’s Sectional Meet into this week’s Regional Meet.

All had high goals for this meet and had been preparing for many months for this day. The team had again researched the field and knew who their competitors were. The team had also made a visit to Rushville earlier in the week to run the course to make sure they knew the terrain and to plot their strategy for the meet.

Freshmen Lydia Harvey and Ella Garvin were representing the Trojans at the Regional Meet based on placing in the top ten individuals the previous week. Harvey knew she had to run her typical race in order to advance to the next level. Garvin knew that she had to run one of her best races of the season, if not her very best race of the season, in order to advance. Before the race there was an air of nervousness in the two freshman preparing to compete in their third big meet in as many weeks. They had gained a great deal of experience this season, yet each of the last few meets yielded increased expectations that they placed upon themselves to finish high in the standings as well as to run faster times. Harvey and Garvin have had a very impressive first season at the high school level but the chase was not over yet. Both had high goals and a solid chance of advancing to the Semi-State Meet. Both knew the competitors they needed to run with and beat in order to make that dream a reality.

Harvey and Garvin both got out to a nice start from the line and cruised through the first mile around the positions where they wanted to be. Harvey was running within the top five and Garvin was running within the top twenty-five. Unfortunately, both had been dealing with different health concerns earlier in the week and were not completely recovered. After the first mile, they both began to struggle. Harvey ran her first mile right where she wanted to be by hitting that mark in 6:01 and proceeded to work hard during the middle mile to stay with with the lead pack. After the two mile mark, with less than a mile to go, several competitors were approaching Harvey from behind. A couple got by Harvey as she dug deep to stay in front of them and keep them at bay. In the final 800 meters of the race Harvey showed her resolve and toughness to pull off a top ten finish. Harvey held strong and placed 10th overall and 5th position of the ten individuals to advance not being in the team scoring. Harvey’s finishing time was 20:34.17 to advance to next week’s Semi-State Meet. This is the first season since 2016 that New Castle has had a girl advance to Semi-State.

Garvin had been fighting off a cough all week and that had not subsided completely by Saturday morning. During the middle mile of the race, Garvin stood her ground challenging any competitor who tried to get past her. The final mile of the race, however, was a challenge for Garvin. Her pace began to fall off and competitors started getting by her. Garvin fought hard to get through the final stages of the race and at the tape, the clock read 22:44.20 which was good for 50th place and not in the standings to move on to Semi-State. Given that Garvin has competed this season so well as a freshman, it is exciting to think of what she will be able to achieve next year as she continues to train and get stronger and faster.

Harvey will continue in State Tournament competition next Saturday, October 26 at 11:15am in the Semi-State Meet hosted at Shelbyville’s Blue River Memorial Park.

Complete Regional results can be found at the following links:

No Events This Week

Events are added by athletic staff.
View All Events