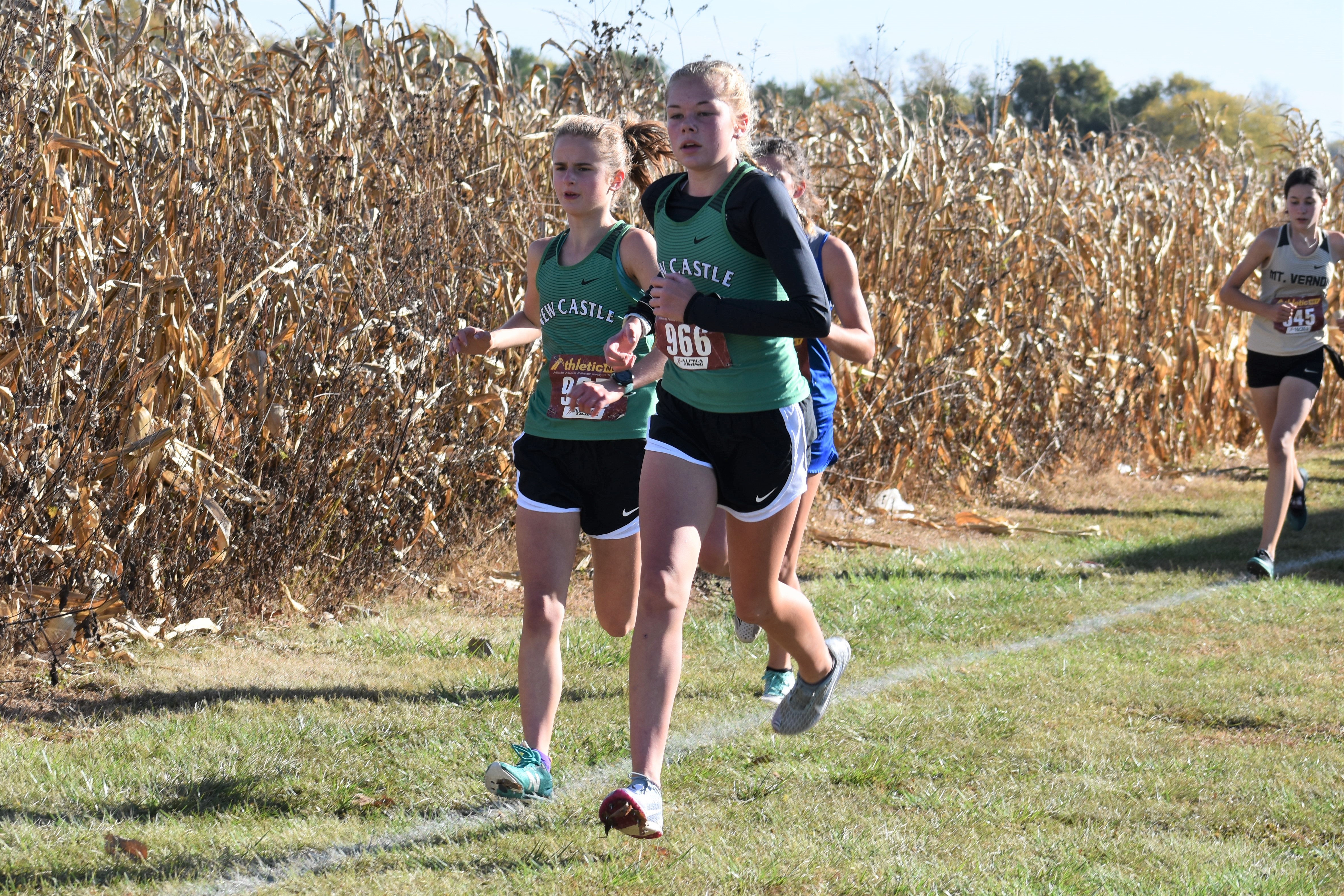 On Saturday, October 17 the New Castle High School Girls & Boys Cross Country Teams traveled to Rushville, Indiana to compete in their second meet of the state tournament, the Regional Meet. The meet was hosted on the grounds of Rushville Middle School. The weather was optimal for a cross country meet. Skies were sunny with a few scattered clouds. At 10:25am, race start time for the girls, temperatures were brisk, in the low to mid 40s with a light breeze out of the west. At 11:40am, race start time for the boys, a stronger breeze out of the west had picked-up and the temperatures were in the low to mid 50s. With each week of the tournament the nervousness and intensity increases and this was reflected in the mood and facial expressions of both teams leading up to each race. But, the Trojan harriers were prepared to tackle the task at hand and had sights on advancing to Semi-State Meet the following week. In high school cross country both girls and boys race the distance of 5,000 meters (3.1 miles). Advancing out of Regional to Semi-State would be the top 5 Teams and the top 10 individuals on non-advancing teams. The Trojans had visited the Regional course a couple of days prior to the meet so they knew the course well and had scouted the competition throughout the week and formulated the strategies that they planned to execute after the starting gun fired. As has been their signature all season, several on each team planned to run together as a pack to push each other to better performances.

In the end the Trojan Boys Team placed 5th and advanced as a Team and the Girls Team had 2 athletes advance (freshman Sydney Mathews and sophomore Lydia Harvey) by placing in the top 10 individuals on non-advancing teams. These Trojans will compete at the Semi-State Meet in Shelbyville on Saturday, October 24. This is the first time since 2011 that the New Castle Boys has advanced to Semi-State as a team.

Going into the Regional Meet the Lady Trojans were seeded 7th and knew they had to run their very best races of the season in order to place in the top 5 teams and advance to Semi-State as a team. Season front runners for the team, freshman Sydney Mathews and sophomore Lydia Harvey had scouted the competition in detail and had their sights on running together as long as they were able in hopes of placing high in the individual standings. Harvey drew from her experiences from her freshman year when she reached this level of the tournament and shared those insights with Mathews. Before the race the two had planned their strategy and discussed different scenarios that may play out during the race and knew they had to focus on place and not time in this meet. By the 1,000 meter mark of the 5,000 meter race the two were right in position where they wanted to be, in the top 20 of the field of 87. After the 1,000 meter mark Harvey and Mathews started moving up through the field. Around the 3,000 meter mark Mathews pulled away from Harvey but both were in solid positions to advance as individuals to the Semi-State meet. Over the last 2,000 meters of the race Mathews surged ahead of every competitor that had placed ahead of her in the Sectional meet the week before. In the end, Mathews was the highest placing individual from the Connersville Sectional finishing in 10th with her second best time of the season 20:08.4. Harvey was not far behind in 18th place with a time of 20:39.7 which was just five seconds off her time at this meet in 2019. Both Mathews and Harvey had advanced as individuals to the Semi-State meet.

The Lady Trojans’ number three runner, sophomore Ella Garvin had advanced to the 2019 Regional meet as an individual along with Harvey, so Garvin knew what to expect when the starting gun fired. Garvin was looking to improve from recent weeks and got out to a good start then settled into a solid pace. During the final mile of the race Garvin pushed hard which resulted in a faster last mile split than in recent weeks. The result was a finishing time of 23:31.6 which was good for 63rd place.

The fourth and fifth runners for the Lady Trojans freshmen Lily Farmer and Lauren Watterson had something to prove as they prepared for what might be their last meet of the season. Both freshmen got out to their fastest first mile of the season. Into the second mile both held strong. In fact, at the 2 mile point Farmer eclipsed the mark 45 seconds faster than she had all season while Watterson was six second faster than she had hit the mark at any point this season. The two were not done yet. Farmer and Watterson both hit the throttle in the final mile of the race. During the last 800 meters of the Farmer put on her kick to the finish and got past one more competitor along the way. The end result was Farmer placing 84th in a personal best time of 25:54.5 which was 49 seconds faster than her previous best. Watterson showed a great deal of mental toughness in the later stages of the race running by herself and keeping her personal record pace that she had maintained from the start. At the tape, Watterson placed 86th with a personal best time of 27:11.7 which was 31 seconds faster than her previous best. From the start of the season Farmer and Watterson had cut 4 minutes and 7 minutes off of their times respectively. An impressive high school start for these two freshmen.

The Lady Trojans’ sixth runner, senior Audra McClure, has struggled all season with pushing through the pain of a bulging disk in her lower back. McClure got out to her fastest first mile of the season and then held strong in the later stages of the race. McClure finished her final Cross Country race of her high school career with a time of 31:01.5 which was just a bit off of her personal best that they had set just a few weeks before.