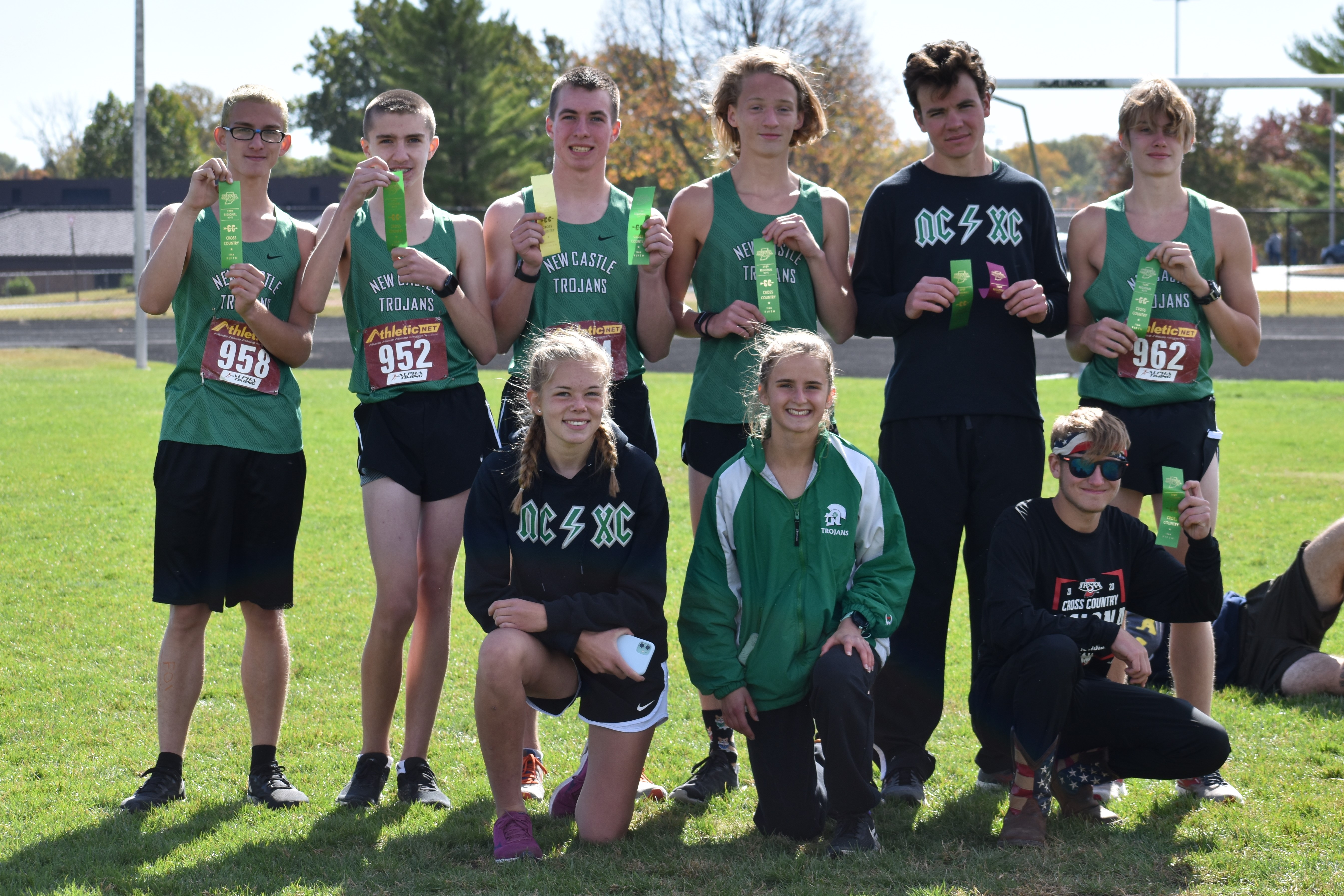 On Saturday, October 17 the New Castle High School Girls & Boys Cross Country Teams traveled to Rushville, Indiana to compete in their second meet of the state tournament, the Regional Meet. The meet was hosted on the grounds of Rushville Middle School. The weather was optimal for a cross country meet. Skies were sunny with a few scattered clouds. At 10:25am, race start time for the girls, temperatures were brisk, in the low to mid 40s with a light breeze out of the west. At 11:40am, race start time for the boys, a stronger breeze out of the west had picked-up and the temperatures were in the low to mid 50s. With each week of the tournament the nervousness and intensity increases and this was reflected in the mood and facial expressions of both teams leading up to each race. But, the Trojan harriers were prepared to tackle the task at hand and had sights on advancing to Semi-State Meet the following week. In high school cross country both girls and boys race the distance of 5,000 meters (3.1 miles). Advancing out of Regional to Semi-State would be the top 5 Teams and the top 10 individuals on non-advancing teams. The Trojans had visited the Regional course a couple of days prior to the meet so they knew the course well and had scouted the competition throughout the week and formulated the strategies that they planned to execute after the starting gun fired. As has been their signature all season, several on each team planned to run together as a pack to push each other to better performances.

In the end the Trojan Boys Team placed 5th and advanced as a Team and the Girls Team had 2 athletes advance (freshman Sydney Mathews and sophomore Lydia Harvey) by placing in the top 10 individuals on non-advancing teams. These Trojans will compete at the Semi-State Meet in Shelbyville on Saturday, October 24. This is the first time since 2011 that the New Castle Boys has advanced to Semi-State as a team.

The Trojan Boys Team knew they were seeded 6th and right on the bubble for advancing as a Team to Semi-State so they focused on finishing as high as they could individually in hopes of putting their team in position to move on. Leading the Trojan boys team as he has all season, was junior Andrew Fewell, coming off of his individual win at the Sectional Meet the week prior. Fewell had his sights on another win. At the starting gun, Fewell got out with the lead pack and ran a smart race as he tucked in behind the leaders and let them set the pace and block the wind. He stayed with the leaders through the first 2 miles of the race when two Franklin Central runners pulled away as Fewell fought hard to stay with them. Fewell was in 3rd place until the final 400 meters of the race when a Mt. Vernon runner challenged for position. Fewell again surged to keep the challenger behind him. At the tape Fewell’s finishing time of 16:43.5 was his third best time of the season and just 15 seconds off of his personal best from a few weeks earlier at the Hoosier Heritage Conference meet. Fewell’s finishing place was 4th in the heavily contested field of 90 competitors.

Junior Skyler Dickey has been steadily improving all season and several of his teammates were planning to key off of him as the pace setter for the Trojan pack. During the first mile of the race Dickey had teammates, freshman Harry Callaway as well as seniors Ethan Moore and Ayden Humbles in tow. At the mile mark Dickey had eclipsed the distance in his fastest split of the season and was in the top 25 as he started his move to advance up through the field. At the 2 mile mark Dickey was still on his fastest pace of the season and had moved into the top 20. Still on the move through the final mile Dickey gained more spots as the race came to a close. In the end, Dickey had placed 15th and ran his best time of the season (17:09.0), just four seconds off of his personal best that he had set in the 2019 Regional Meet. Callaway too ran his best first and second mile splits of the season. In the final stages of the race Callaway was in a pack with four competitors. As Callaway rounded the second to last turn with less than 400 meters to go he was still in the thick of that pack. As they neared the last turn and the finish line Callaway put on a surge to leave three of the competitors behind and nipped the fourth at the line by one-tenth of a second. Callaway’s final placing was 38th with a time of 18:00.0 which was just five seconds off of his personal best. Not far behind was Moore who was in the mix with about six other runners jostling for position. As Moore entered the final 400 meters of the race he managed to keep several of the competitors behind him which definitely helped with the team scoring. Moore’s final placing was 49th which resulted in his third best time of the season 18:21.2. Humbles had eclipsed his first two miles of the race faster than he had done all season and was still on the move. Moving into the final stages of the race, Humbles too found himself surrounded by a pack of six other competitors. Humbles was able to keep four of those competitors behind him as he crossed the line, also helping with the team score. Humbles placed 62nd in a time of 18:47.2 which was his second best time of the season.

Rounding out the Regional squad for the Trojans were seniors Quentin Hedges and Dominic Reynolds. Hedges and Reynolds had been solid 6th and 7th finishers for the team in recent weeks and had been improving in the later stages of the season. Both were looking to make even greater gains in this meet. At the start both got out a bit faster than normal and eclipsed the first mile faster than they had all season. As they completed the second mile both were still on pace to post one of their best performances of the season. The result for both Hedges and Reynolds were their second times of the season. Hedges finished in 19:17.8 (78th place) and Reynolds in 19:47.1 (84th place).

After the race the Trojans were not sure if their efforts had paid off. There were some uneasy moments as the team waited for the final results to be posted. When the team scores were announced in reverse order the names of schools who had placed higher than New Castle in the Sectional Meet were called. When Rushville was announced as 6th the Trojans knew they had placed 5th and advanced to Semi-State. The Trojans were a solid 22 points ahead of Rushville. This was a complete team effort by the Trojans and it paid off.