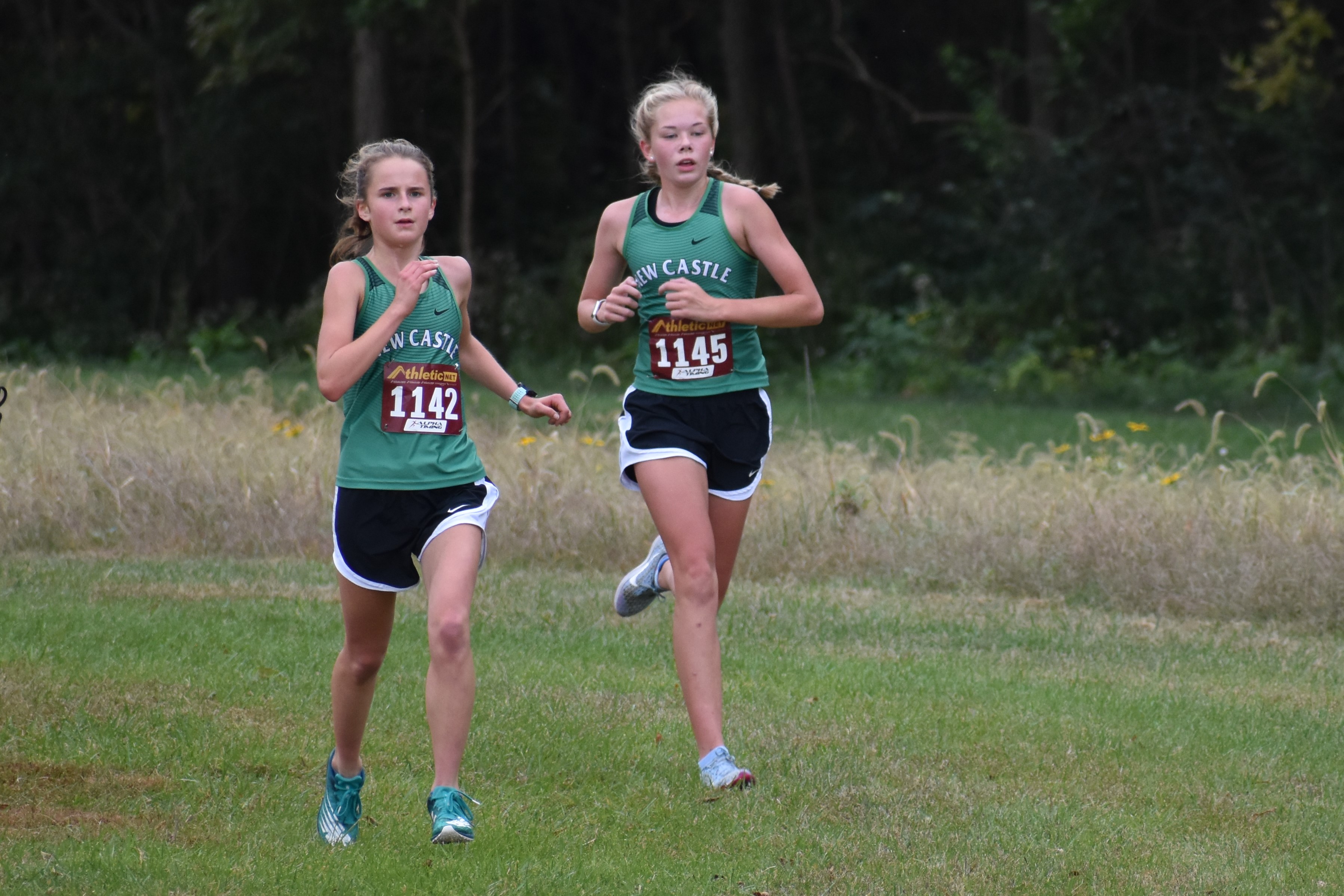 On Saturday, October 3 the New Castle High School Girls & Boys Cross Country Teams traveled to Shelbyville, Indiana to compete in the Hoosier Heritage Conference (HHC) meet. The meet was hosted at the Blue River Championship Cross Country Course on the grounds of Shelbyville’s Blue River Memorial Park. The weather was perfect for a cross country meet. At race time for the girls the skies were clear with no wind, and temperatures in the mid 40s. By the time of the boys race a slight breeze had picked-up, the skies were sunny, and temperatures in the low 50s. Several Trojan harriers had sights on All Conference honors (top 15 in the individual standings). And, many on the team had pre-race strategies to run with teammates to push each other to better performances. Before their races, the Trojans had visible pre-race jitters, yet they were pumped-up and focused to execute their plans to achieve their goals for the day. The result were four athletes earning All Conference (two girls and two boys) and most on both teams running their best ever times or season best times. Since entering the HHC in 2013, this is the most All Conference honors that New Castle has earned since the HHC reduced All Conference honors from the top 20 to the top 15 individuals after the 2015 season.

With their sights on All Conference honors (top 15 individuals), freshman Sydney Mathews and sophomore Lydia Harvey had a strategy of working together to achieve their collective goal. Harvey knew what it takes to achieve the goal as she had earned All Conference her freshman year by placing 3rd in the 2019 HHC meet. Both Harvey and Mathews are known for their even pacing throughout the 5,000 meter effort, however they knew during this contest they would have to get out faster than in previous meets in order to stay in contact with the lead pack. At the 1 mile mark the two were within the top twenty competitors when they started their campaign for the front of the field. At the halfway point in the race both were in the top fifteen, but that was not enough for these two. By the 2 mile mark both were in the top 10 and still moving up through the field. With 1,000 meters to go Harvey and Mathews were running in 7th and 8th. Rounding the last turn onto the finishing stretch with 600 meters to go the two made their final surge to the tape. Both got around a competitor from New Palestine and set their sights on the finish line, still 400 meters away. At the line Mathews was 6th with a personal best time of 19:58.95 and Harvey was 7th with a season best time of 20:07.51 and both had earned All Conference honors.

Sophomore Ella Garvin, the Lady Trojans solid #3 runner this season, struggled to get her stride during the race. Garvin, being a strong competitor, pushed through the pain to do the best she could on this day to help her team. Garvin placed 45th with a time of 24:11.11. Rounding out the top 5 scoring for New Castle were freshmen Lily Farmer and Lauren Watterson. Both Farmer and Watterson got off to a faster start than the previous week and really pushed the middle portion of the race but the difference was in the later stages of the race. Farmer’s last mile was seventeen seconds faster than the previous week which resulted in a time of 26:47.02 (good for 49th) which was very close to the time that she ran the week prior and around 20 seconds off of her personal best. Watterson worked with Farmer for as long as she could which resulted in her fastest first mile of the season. After holding strong through the middle of the race, Watterson came back with her quickest last mile of any race this season and really pushed towards the finish. The result was, for the third week in a row, Watterson running a personal best time of 27:43.10 (50th place) which was 51 seconds faster than the previous meet and over 6 minutes faster than her first race of the season seven weeks prior. Senior Audra McClure completed the varsity squad. McClure had been dealing with lower back pain for weeks, but was determined to perform her best in her last HHC appearance. McClure ran her absolute best mile splits of the season which resulted in shaving one minute twenty-one seconds off of her personal best time. McClure’s time of 29:53.22 was good for 52nd place. The Lady Trojans finished 7th in the team standings in the HHC.

In the junior varsity race, sisters sophomore Savannah Kernel and junior Jamie Kernel represented the Lady Trojans. Savannah and Jamie, in their final race of the season, had something to prove between the starting gun and the finish line. Savannah got out a bit faster than normal and held strong in the later stages of the race to finish with a season best time of 23:48.0 which was twenty seconds faster than the previous week on the same course. Jamie got out like a shot compared to any other race this season with her first mile being 45 seconds faster than the week prior. Jamie held the sizzling pace through the last two miles of the race which resulted in a personal best time of 25:23.0. That time was over a minute-twenty three seconds faster than her previous best the week before and almost six minutes faster than her first race of the season. The Trojans look forward to the contributions the Kernel sisters will make as part of the squad next year.