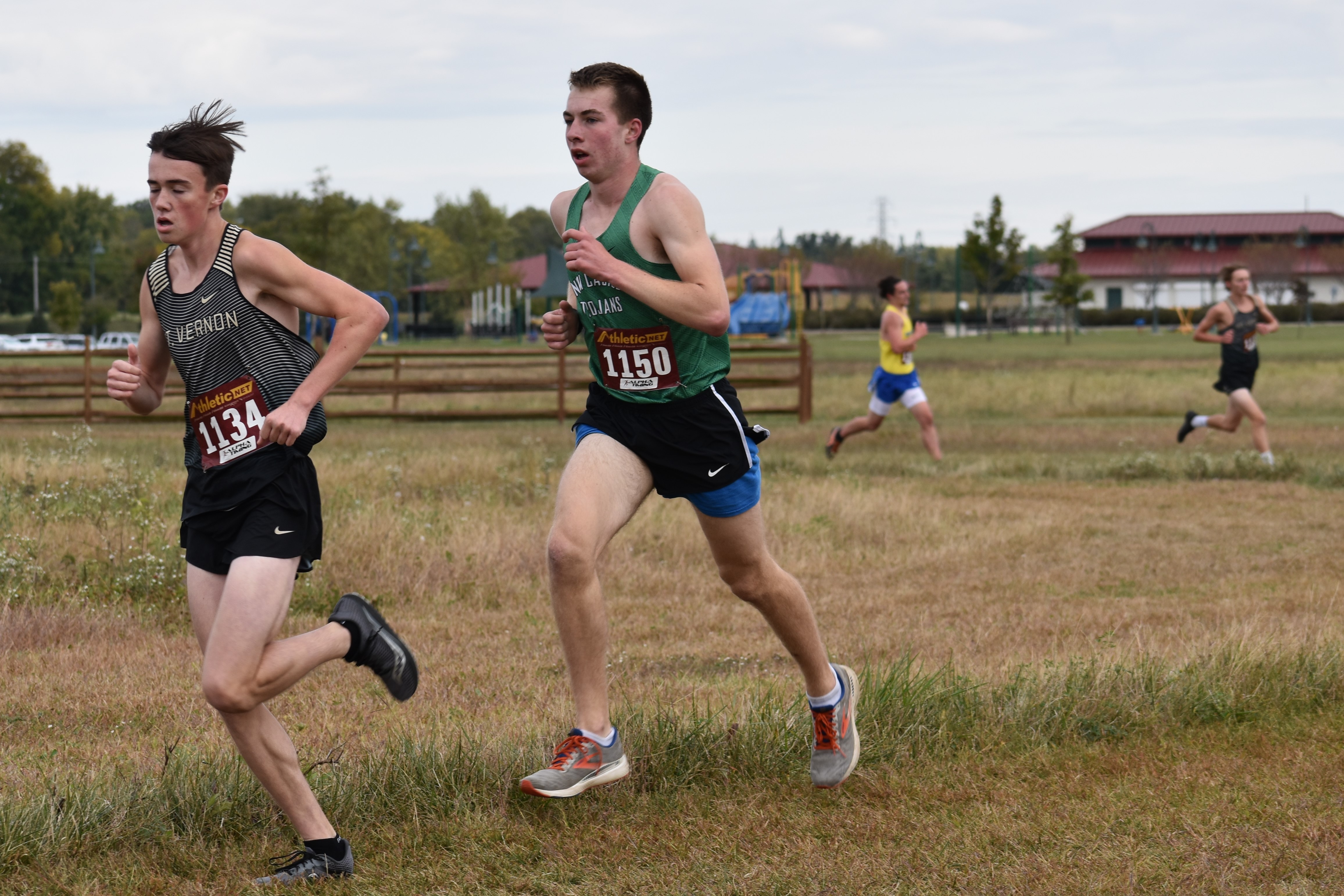 On Saturday, October 3 the New Castle High School Girls & Boys Cross Country Teams traveled to Shelbyville, Indiana to compete in the Hoosier Heritage Conference (HHC) meet. The meet was hosted at the Blue River Championship Cross Country Course on the grounds of Shelbyville’s Blue River Memorial Park. The weather was perfect for a cross country meet. At race time for the girls the skies were clear with no wind, and temperatures in the mid 40s. By the time of the boys race a slight breeze had picked-up, the skies were sunny, and temperatures in the low 50s. Several Trojan harriers had sights on All Conference honors (top 15 in the individual standings). And, many on the team had pre-race strategies to run with teammates to push each other to better performances. Before their races, the Trojans had visible pre-race jitters, yet they were pumped-up and focused to execute their plans to achieve their goals for the day. The result were four athletes earning All Conference (two girls and two boys) and most on both teams running their best ever times or season best times. Since entering the HHC in 2013, this is the most All Conference honors that New Castle has earned since the HHC reduced All Conference honors from the top 20 to the top 15 individuals after the 2015 season.

Junior Andrew Fewell earned All Conference honors and won the boys race, becoming the first Cross Country HHC Champion for New Castle. Fewell ran a smart race from the starting gun and stayed stride for stride with two Mt. Vernon runners for the first two miles of the race when one of the competitors fell away and left just Fewell and one Mt. Vernon runner to jockey for position during the final mile of the race. Around 800 meters to go, Fewell made his final push to the finish as the Mt. Vernon runner tried his best to hang on. Down the final stretch, Fewell did not let off the throttle until the tape where he was the first to cross the line with a personal best time of 16:28.2 and the second place competitor was seven seconds back. This is the first time New Castle has had an individual HHC Meet Champion. Fewell’s HHC time places him 7th on the New Castle all-time list since boys started running the 5,000 meter distance in 1980.

Unfortunately, the Trojans were without their typical number two runner, freshman Harry Callaway, due to quarantine. This meant that Callaway’s teammates, consisting of two juniors and five seniors, needed to step up to fill the void, and that they did. The first to step up was junior Skyler Dickey who has been progressively getting faster all season and had his sights on the All Conference honors that evaded him during his sophomore season. During the first mile of the race, Dickey ran stride for stride with senior teammates Ethan Moore and Ayden Humbles. At the mile mark Dickey was around 25th place and knew he needed to start moving up through the field of 55 runners. By the 2 mile mark in the 3.1 mile race Dickey had moved up to 18th place. With 1,000 meters to go Dickey was in 16th place. Rounding the final turn onto the 600 meter straight away to the finish line, Dickey was still in 16th place as he put on a final surge down the home stretch to put himself into 14th place which he held to the line. Dickey earned All Conference honors with a season best time of 17:20.09 which was 36 seconds faster than the week before on the same course. Up next for the Trojans was Moore who ran a very strong race, just seven seconds off the week before and placed 25th in a time of 18:09.63. Humbles was back in action after missing two meets to rehab an injury. Humbles ran a solid for his return to the team and helped fill the void with Callaway out. Humbles finished 39th with his second best time of the season (18:53.7). Just behind Humbles was the final senior in scoring position for the Trojans, Quentin Hedges. Hedges, always a definite team player, knew as the final scoring NC runner, with Callaway sidelined he needed to step up his game. Hedges got out a bit faster than his typical pace and held strong throughout the race to finish thirty seconds faster than the week before on the same course with a best ever time of 18:56.62 which was good for 41st place. Rounding out the varsity squad for the Trojans were seniors Dominic Reynolds and Ben Hall. Knowing that Callaway would be back in action the following week, Reynolds and Hall were vying for the last varsity spot on the Trojan’s Sectional squad. The previous week the two were only separated by a few seconds at the tape. At the starting gun, Reynolds got out faster than normal and Hall tried to go with him. At some point around the mile mark Hall twisted an ankle and fell off the pace. Reynolds kept true to his strong start and ended with a personal best time of 19:43.94 which was almost 35 seconds faster than his previous best the week before and good for 48th place. Hall, visibly struggling, pushed his way to the finish in 21:23.59 (54th place).

In the team standings, the Trojan boys placed 4th which equals the highest ranking New Castle has achieved as a team since joining the HHC in 2013. The last time the Trojans placed 4th as a team was 2015.

In the junior varsity race, first year senior David Gwinn has been on a mission in recent weeks to drop his times by leaps and bounds. Gwinn started his race much faster than the previous week and then continued to push hard throughout the race. At the finish line, Gwinn had posted a personal best time of 21:08.0 which was almost 42 seconds faster than the previous meet and over six minutes faster than his first meet of the season. Junior Josh McCune rounded out the roster for the Trojans, posting a solid performance finishing in a time of 24:27.0 which was within seconds of his time the previous week on the same course.