Tuesday, February 18th:  The Trojans began a very busy week with a trip to Pendleton Heights to face the Arabians.  The Arabian came into the night having won the past seven meetings between the two programs.  New Castle got off to a great start in what wound up being another game that came down to the wire.  In the end, the Trojans came up short, falling 41-37.  Abe Haler led New Castle with 14 points, and Austin Orr grabbed 10 rebounds.

Friday, February 21st: On Hall of Fame night, New Castle welcomed Anderson to the fieldhouse.  The Indians came in with a 9-10 record, boasting a very athletic group.  Anderson took a 34-29 halftime lead into the locker room, but the Trojans opened up the 2nd half with a 10-0 run and never relinquished the lead.  In what wound up being a great team effort all around, New Castle defeated Anderson 72-63.  Five Trojans finished in double figures: Austin Orr (19 pts., 9 rebs), Kyle Bumbalough (15 pts.), Andrew Garrett (14 pts.), EJ Sorrell (12 pts.), and Abe Haler (10 pts, 12 rebs).  New Castle shot 58% from the field on the evening.

Saturday, February 22nd:  New Castle finished the week with a trip to historic John Wooden Court to take on the Martinsville Artesians.  The Artesians have amassed an impressive resume, with victories over Park Tudor (#1 in 2A) and Mooresville (#15 in 4A).  Coming off of a big victory Friday night, New Castle was looking to continue their winning ways.  Unfortunately, the Trojans suffered one of the worst shooting nights (34% from the field) struggling to keep up with a hot-handed Martinsville squad.  New Castle succumbed to the Artesians 68-46.

Last Saturday, Luke Decker finished 3rd in the New Castle Semi-State to earn a berth on the state finals at Bankers Life Fieldhouse.  During the opening round on Friday night, Decker met up with Kennith Hughes (Lowell HS), who held a 34-1 record.  In a very tough match, Decker lost to Hughes in a 9-3 deision, finishing his senior season 38-6.  We want to congratulate Luke on a fantastic season, and thank him for representing New Castle with class. 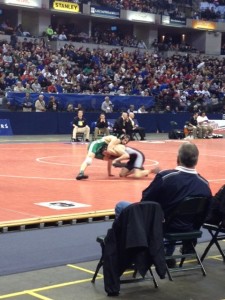 Robbie Lamb had a great meet finishing 12th in the 200 Free and 10th in the 500 Free; both were lifetime bests.

TROJANS IN THE NEWS:

Lauryn Gillis continues to rack up the accolades, being named to Volleyball Magazines 2014 Fab 50 list.  Here is the link to the article on USC’s website: Lauryn Gillis Fab 50

The Indianapolis Star posted this video this week:  5 questions with Trey Ball

Gymnastics:  The Trojan gymnasts will finish the regular season this week with 2 home meets.  Hagerstown and Muncie Central will visit New Castle for a triple dual on Wednesday, February 26th, with a 6:30 PM start.  New Palestine will travel to New Castle on Saturday, March 1st for a makeup meet at 11:00 AM.

Boys Basketball: The Trojans will finish the regular season this week with two home games.  Mississinewa will visit the fieldhouse on Thursday, February 27th, and Westfield will finally make their way over (cancelled twice previously) on Friday, February 28th.  The JV games will be at 6:00 PM both nights, with varsity following at approximately 7:30 PM.  Senior night will be on Friday!